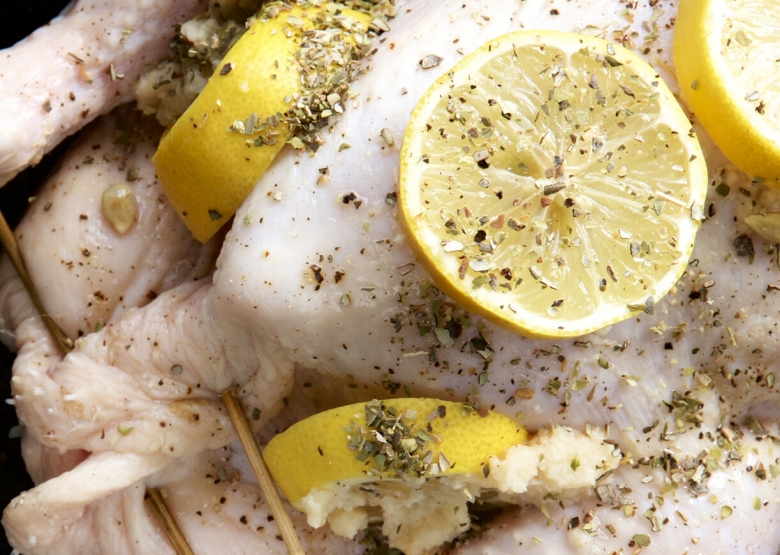 If you like to keep things simple and need precious oven space for all the trimmings you’ll be cooking up, then perhaps consider slow cooking your turkey. Of course, make sure that your slow cooker can accommodate your turkey first, but assuming it can, this is a great way to get the turkey on and then forget about it for a few hours before allowing to rest and serve up on the Christmas table.

Begin by making a rub for the outside of your turkey. Simply combine all the dry ingredients into a small bowl, mix well and leave to one side.

Next place your roughly chopped vegetables, 2 chopped garlic cloves and one of the chopped onions into the bottom of the slow cooker. These will act as the base for your turkey to sit on whilst cooking.

Now to ready your turkey. Remove the giblets from inside the cavity and any string around the bird. Using the crushed garlic, rub all over the outside of the turkey including the wings and legs of the bird. Rub on the inside of the turkey before then adding the lemon quarters to the cavity. Add the other chopped onion and the bay leaves to the cavity and then tie the legs together again with kitchen twine.

Place the turkey on top of the bed of vegetables in the slow cooker. Now layer the rashers of Denhay streaky bacon over the crown and legs of the turkey. Cover and cook for approx. 8hrs but do check as cooking times will vary depending on the size of turkey and the slow cooker you have.

When the turkey is cooked and juices run clear, place in a large oven proof tray. Turn the grill on medium heat in your oven and place the turkey underneath it for 5 minutes until the bacon has crisped. Remove the bacon and put the turkey back under the grill for a further 5 minutes to allow the skin to brown and crips. Keep a beady eye on the turkey at this point because you don’t want it to burn at the last minute!

Now set the turkey aside, covered loosely with foil, and allow to rest for 40mins before carving.

We have lots of delicious recipes using Denhay’s award winning dry cured bacon and gammon. Click on the links below to discover more.