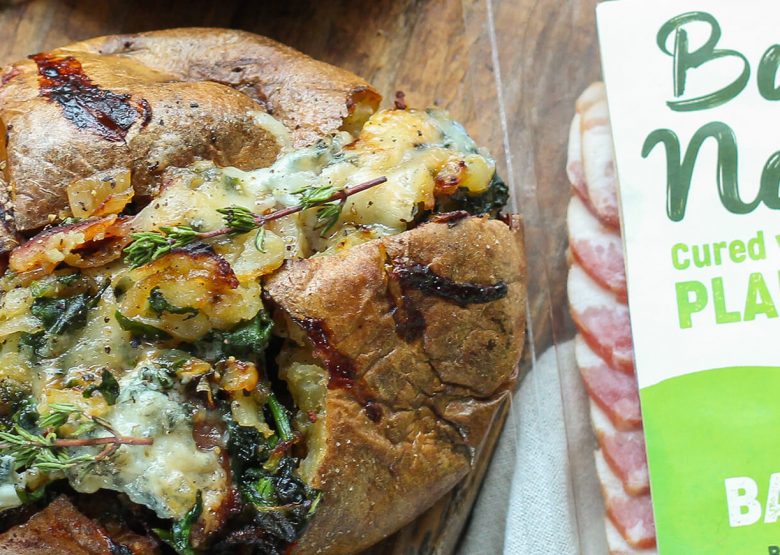 I love a jacket potato! It's one of the most filling dinners and one that I know there will be absolutely no complaints about!

This is one of my favourite combos. The crispiest potatoes stuffed with bacon, sweet shallots, spinach...with a lovely melty gorgonzola top! You can use stilton if you prefer...

This is a recipe I've created for Bacon by Nature - an unsmoked bacon that manages to get an incredible smokey flavour by curing with plant based ingredients rather than nitrates. If you haven't tried it yet - I would 100% recommend it. It's available online from Amazon Fresh, Waitrose and Morrisons within the M25.

5 rashers of Bacon by Nature Unsmoked Back Bacon

Pierce your potatoes with a narrow knife a few times, so that it goes right to the centre. Drizzle them with a little olive oil and use your hands to ensure they're coated all over. Sprinkle a little salt over them and bake in the oven for an hour or until they're crisp on the outside and soft in the middle.

Make the filling: Heat a drizzle of oil in a saucepan. Add the bacon pieces and shallot. Fry on a medium heat for 5 minutes or until the bacon is crispy and the shallots are soft.

Add the spinach and fresh Thyme and stir until the spinach has melted. Season with salt and pepper and set aside.

When the potatoes are cooked, remove them from the oven. Open them up carefully. Roughly spoon out most of the potato - don't worry if you can't get it all.

Add the potato to the bacon and shallots and roughly mix until evenly distributed.Spoon the mixture back into the potatoes, don't press down.

Break the gorgonzola into cubes and place them on top. Gently fold the sides of the potato back in, to hold the filling inside (it doesn't matter if it doesn't close completely.)

Finish with a little black pepper and return to the oven for 10 minutes until the cheese has melted.

We have lots of delicious recipes using Denhay’s award winning dry cured bacon and gammon. Click on the links below to discover more.